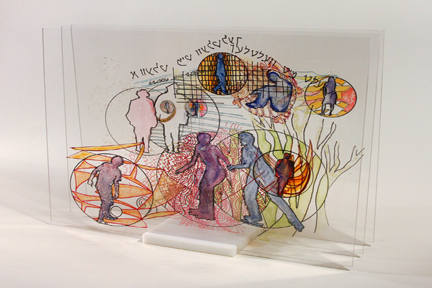 by danielgolani on November 17, 2014 in Yiddish Sayings

Each person has an aura, an area of influence.Some people are very important and influential in our lives, while some are seem to be unimportant. However, even a child may have influence and impact on the adults and other children than surround them. Every action of ours affects the universe.

These ideas are visually translated into three parallel plexiglass panes within a few inches of distance. On each plexiglass people of different ages and outlook are portrayed with vibrations or lines representing their auras. Because of the plexiglass transparency one can see how these auras influence  or intercept other peoples auras.