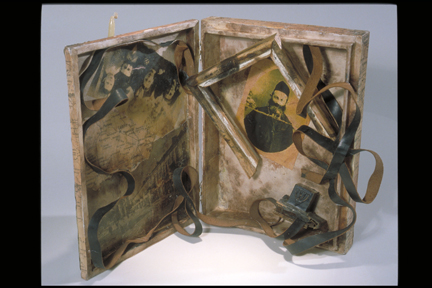 Memorial to my grandfather Avrumele who was murdered, in Poland, during the Holocaust.Those who knew him called him a “sheyner Yid”. My father’s tefilin are the only thing our family owns that was ever touched by my grandfather. With that in mind I designed this box.

The inside has a broken and burned picture frame around his photo and a picture of Opole, his shtetl, surrounded by the tefillin’s leather straps.

On the outside of the box, I have his Yad Vashem testimony page attesting that he was gassed, surrounded by aluminum steal, which represents the technological advance of Nazi Germany. Here, I also have a candle in honor of his soul. The back of the box has Poland’s map and the words of the prayer Yizkor on it. Poland is an enormous Jewish cemetery.